This third interview is with the artist named Yusuke Asai.
Mr. Asai is an artist who continues to attract people by exhibiting his works at art festivals and museums nationwide,
expressing his own world view using different materials tailored to each specific situation,
such as drawing plants using water-resistant markers on masking tape called
"Masking Plant," "Earth Paintings" that are drawn using local soil,
and his "Terrestrial Paintings" series made of white line material used for roads, and others.
We asked Mr. Asai, who is also currently participating in the mt art project,
how he started drawing art using masking tape and his philosophy,
at one of the venues called the ushimado TEPEMOK.

Yusuke Asai Profile
Born in Tokyo in 1981. Produces paintings in a free-spirited manner, anywhere with differing conditions, such as his "Masking Plant" series, where masking tape is drawn using water-resistant markers.
The fundamental motifs drawn by Mr. Asai represent the ecosystem of the universe, such as the appearance of small animals and plants nested in large creatures, arranged without gaps on a screen.

1. What is a Masking Plant?

This takes the atelier outside.
The "Masking Plant" was a major change.
Because I am a rather quick drawer, my paintings continue to increase.
The more I draw, the more my room fills up.
I enjoy painting, but I don't quite like it when I run out of space.
And, while cycling back and forth between my atelier and my home,
I noticed that I wouldn't have any trouble if that entire space were my atelier.
So when I looked at the city with that feeling, there were plenty of them, telephone poles (laughter).
When I counted the number of telephone poles from my home to my atelier, it was rather enjoyable.
I thought that if I put the masking tape that I usually carry as painting material in my bag,
in that space, and that area could definitely become my atelier.

So instead of wanting to do something bad or cause some mischief there,
the masking tape filled that feeling in me to want to draw there.
That was the beginning, and so I would draw and the peel it away, and it repeat that to what you see now.
I had thought that there is a place to draw, and there is a place to show what you drew there.
But If using masking tape, the place where you draw and show your work is the same,
and I think that masking tape is a very powerful tool in the sense that it can change a place
where works are not shown in the first place to become a place where works can be shown. 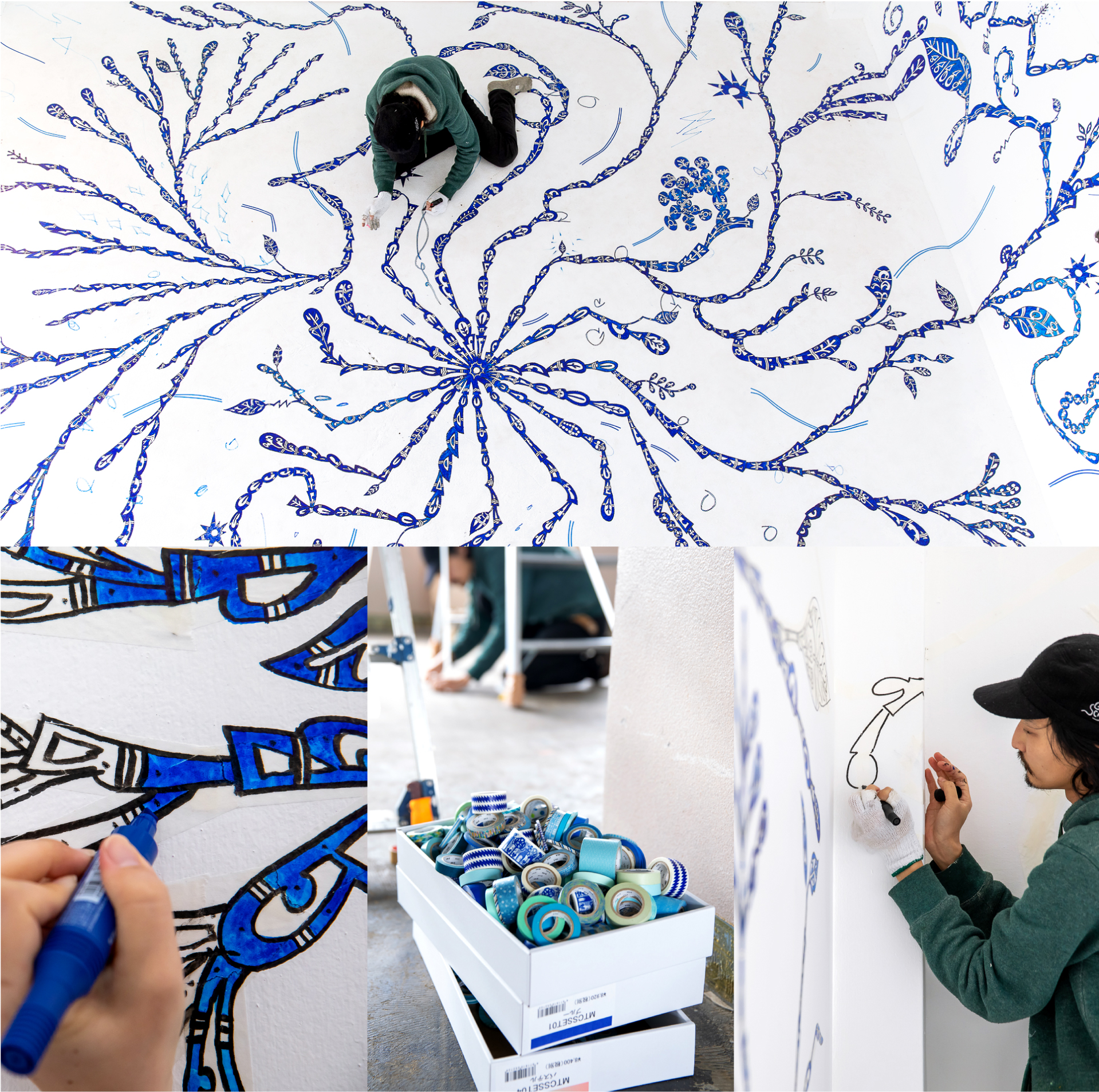 My sense is not to make what I want to make,
but to be moved by people who gather there and the place where I work.
For better or worse, an artist who make things not limited to myself will acquire the technique the more they draw,
and it will simply become routine.
It's not that I want to break through that, it is inevitable that my work and the space I've been given have grown.
But I started to get help from people when the time that I can use has shortened.
This applies to my work for the mt art project done for ushimado this time,
and I think you may feel nervous and excited to add a touch to the work of other people.
And you may wonder if it really is alright.
We can share that freshness by putting that tension and excitement into my paintings.
There is much that I obtain by including a lot of the lines that I can't control.
After all, I want you to enjoy it when we do it together, so I work hard to explain it.
If I'm alone, I don't have to put into words what I'm doing. But when I explain, I have to put into words what I'm doing.
If I do so, then I can realize what I didn't understand.
I tell people who come to me to help that they don't need art education or technique,
so there is a lot that can be gained by talking to children, or the local old ladies,
and even people who have little or no interest in art. 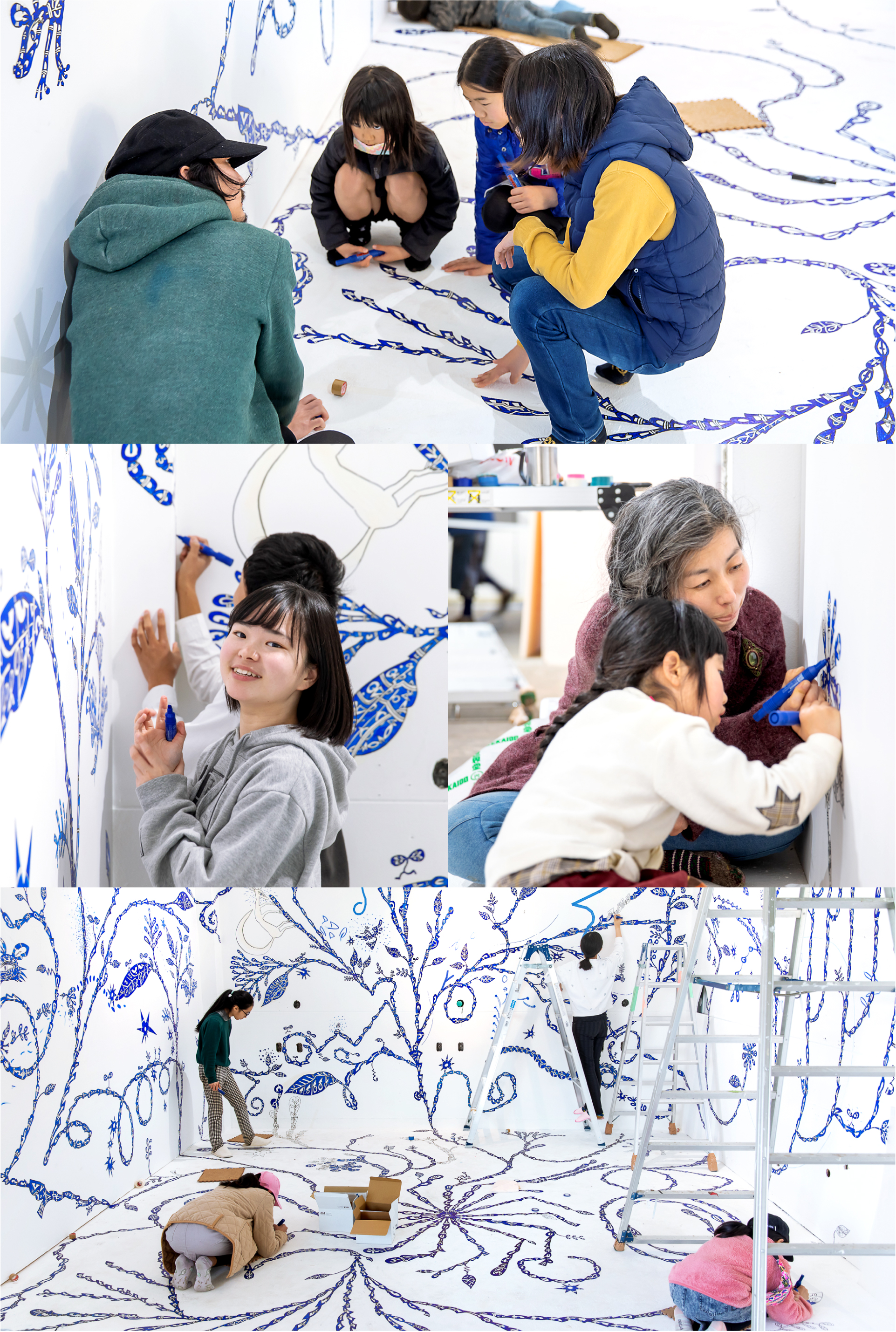 I will grow the more I do, so I'll do it more and more.
It's like raising an animal.
Masking tape is a strong ally. There almost no places where masking tape cannot be used, wherever you go.
Tape is not just tape as it is. It becomes tape when you affix it somewhere, and how you affix it.
In that sense, an artist who uses tape has the power to read the environment and the ability to think botanically.
Animals can move to their favorite environments,
but plants are risking their lives to see how they can grow where they are.
If it thinks it can't live there, it won't bud in the first place.
I think that an artist who uses tape needs the ability to read space.
When I looked at their works, manners, or attitudes I felt it is true this time. 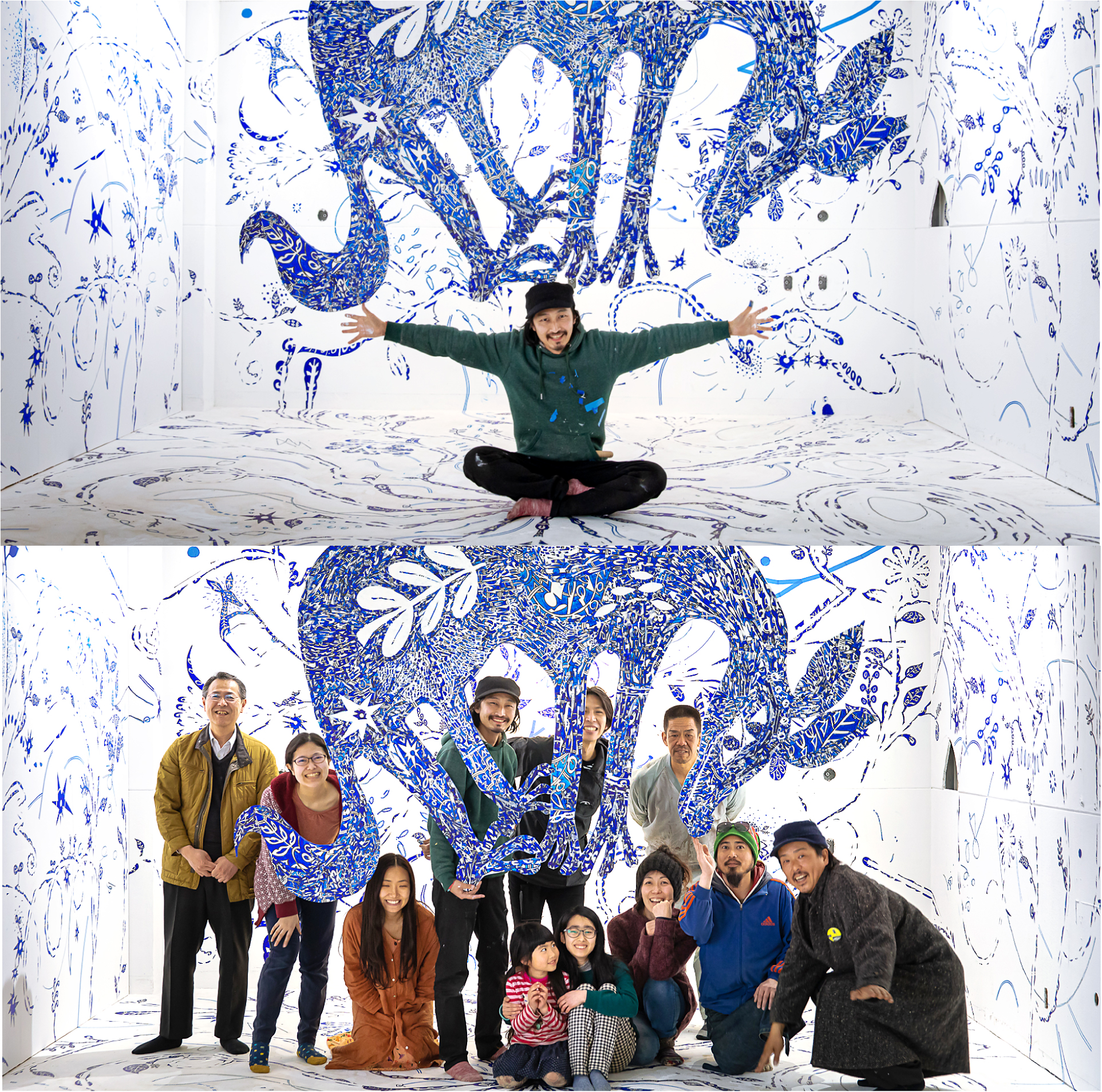